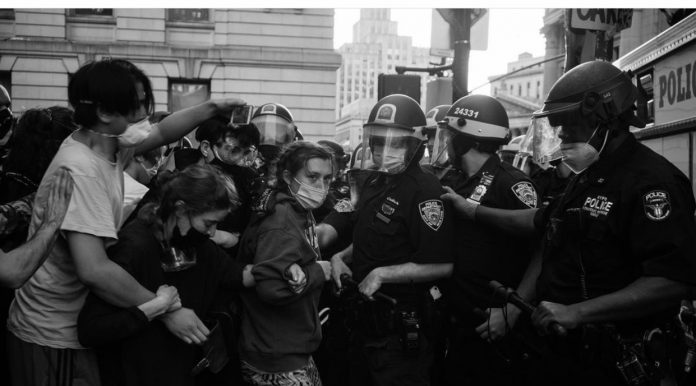 “Am I Next?”, chronicles the journey of Chris Cook, a Brooklyn photographer, who captured the world as it was falling apart when a white man in a police uniform suffocated a black man to death with his knee. Twelve of Cook’s photos give a striking view of the aftermath that followed in the rise of the Black Lives Matter movement, and they have made their debut at Welancora Gallery. He captures the subtle nuances, connected humanity, and quiet irony that made Black Lives Matter such a unique time in history. People from all walks of life gathered all over the world to protest against the appalling murder of George Floyd, and the way they came together in solidarity was truly powerful. Cook ventured out into conflict for 30 days straight, revealing the different sides of human interaction, capturing peaceful citizens, police, and children he saw during the protests in Washington DC and NYC. “I realized that people had different agendas. Some people wanted to help and others wanted to wreak havoc. Everyone had a different idea of what the protests meant, and I wanted to capture each angle I could.”

The gallery owner, Ivy Jones, suggested the title of the project, which was inspired by his photo of a small boy resting on his father’s shoulders with a sign that read, “My Name Is Marion, Am I Next?” as a picture of George Floyd looms in the distance. Chris reflects on the haunting nature of the question. “It seems, as black people, we are always blamed for our deaths. This was about George Floyd but there are so many names here. Trayvon Martin just had a bag of skittles. I have to take into consideration that I’m not safe either. I mean, my camera is small and black, it could be viewed as a gun. It’s just something I have to think about too.”

Cook shot over 180 photos to document the camaraderie in the midst of trauma and violence. Also, he effortlessly revealed that this time around, the optics were unconventional. For a period of time, everyone was angry at what happened to a man who was mercilessly killed at the hands of a police officer. Cook captured white protestors who locked arms against the police force, one of which was a black man. In another photo, a black man holds up a sign that says “The Revolution Will Be Streamed,” as a sea of mostly white protestors serve as his backdrop. This is such an interesting statement, considering that George Floyd’s murder was streamed for everyone to view, which sparked the global outrage. Chris concludes that technology was a singular source that made the protests more effective. “It was something that gave it more awareness. It was different in the 60s, because there weren’t any cell phones at the time, as people passed on the message through fliers. So now, there is more communication and it can be more widespread.”

Cook’s photographic works seem to belong in a time loop. In a sense, they are eerily similar to the Civil Rights Movement of the past. Upon looking at his art, it is difficult to distinguish if it was taken today or sixty years ago, yet some notable photos are accented by the presence of masks and cell phones in hand. These elements are now a normal part of everyday life. “I used to keep phones out of my work, but I felt that it was important to have them archived in history because who knows if we will even have cell phones in the future? I wanted to compare the past with the present, which is also the past now.”

Upon looking at the exhibit, I also gained a hopeful insight into the title “Am I next?”. Perhaps the question is actually taking all of us into consideration. Are we next, to stand up and fight against the injustices at hand? Do we take responsibility, both collectively and individually that change begins and ends with us? The Preamble to the Constitution, says “We the People,” after all. Even though time is in a strange place at the moment, it’s easy for this monumental protest to fade in our memory and fall into the distance. Yet, Cook’s work serves as a reminder, that we all play a part in how this moment in time changes us as a whole.

Cook is delighted that he is showcasing his work in Welancora because the gallery is in the area where he grew up. “It’s really full circle for me because I grew up here and now I’m showcasing my work there. I’m so fortunate for it.” He is currently planning to have his works published in a book so that they can be viewed in their entirety.

You can see his work at Welancora Gallery at 33 Herkimer Street, Brooklyn NY Tuesdays through Sundays from 11am to 5pm from now until March 7th. COVID 19 protocol is in effect and you must select an appointment time to enter the gallery here. The exhibit can also be viewed virtually until April 10th, 2021. Also, if you would like to see more of his work, be sure to check out his visually conscious Instagram and website!

5 Reasons Why Your Roll Turned Out Blank