As a photographer who loves to shoot film, the hardest part about packing for a trip is often choosing what camera and film to bring. Do I bring just one favorite, trusty camera? What about portability? Is it too much to lug around the beefy medium format camera? What if I need to pick up more film?

This was all in my mind as I prepared for a solo trip to the Netherlands in April, a trip made possible through a home exchange arrangement where I swapped my New York City apartment for a flat in the Jordaan neighborhood of Amsterdam. I hadn’t been to Amsterdam in over 8 years, but remembered it as a historic city with beautiful canals, footbridges, and bikes – lots and lots of bikes.

Ultimately, I couldn’t choose any one camera to bring, so I did the logical thing and brought three:

Above: the three cameras I brought

Along with a variety of film:

Packing the film and cameras was straightforward, fitting the two 35mm cameras into my carryon and larger 120 camera in my backpack. The chunky Mamiya was in a canvas totebag (in hindsight, not exactly the safest) but I was extremely mindful to not throw my backpack around. TSA had no issues with the gear and I brought the film through the standard x-ray machine with no trouble. Piece of cake!

I had been connected with a Dutch photographer, Annemarie de Wit for a few years via mutual submissions to the Indisposable Concept project, so I reached out on Instagram and we made plans to link up in the De Pijp neighborhood, a cool area with shops, restaurants, and the famous Albert Cuyp Market. Annemarie enthusiastically shared recommendations for things to check out while in Amsterdam and our mutual interest in film photography led to an introduction to the Analog Club Amsterdam (ACA) group led by the photographer Barry van Weldam.

“ACA is a place that connects like-minded people who have a love for analog technology and particularly analog photography.”

Barry wrote. ACA organizes photowalks, screenings, workshops, and feedback sessions in a similar vein to Photodom, and I was excited to find myself invited to an impromptu photowalk with the group the next day.

It was an overcast Saturday morning with fast-moving clouds and patches of blue sky. The springtime weather was a challenge, with on-and-off rain and even some light snow — it was cold! However, this was offset by warm welcome from the ACA and soon I was hoofing it through the streets of Amsterdam with the friendly group of photographers. We geeked out on each other’s cameras while taking snapshots as we made our way through the city center to the Daido Moriyama ‘71 New York exhibit at the Reflex Amsterdam gallery.

Above: group photo of the ACA cameras

The moving clouds and patchy sun made it more time consuming than I expected to get my metering set on the bulky medium format Mamiya 645; inconsistent light was a challenge and often by the time I was ready to shoot with the 120 camera, the street-scene I saw had already passed.

Another challenge with the varying light was shooting the 35mm Cinestill 50D film with its lower ISO, but this was countered with the fast, intuitive metering system of the Minolta X-700. 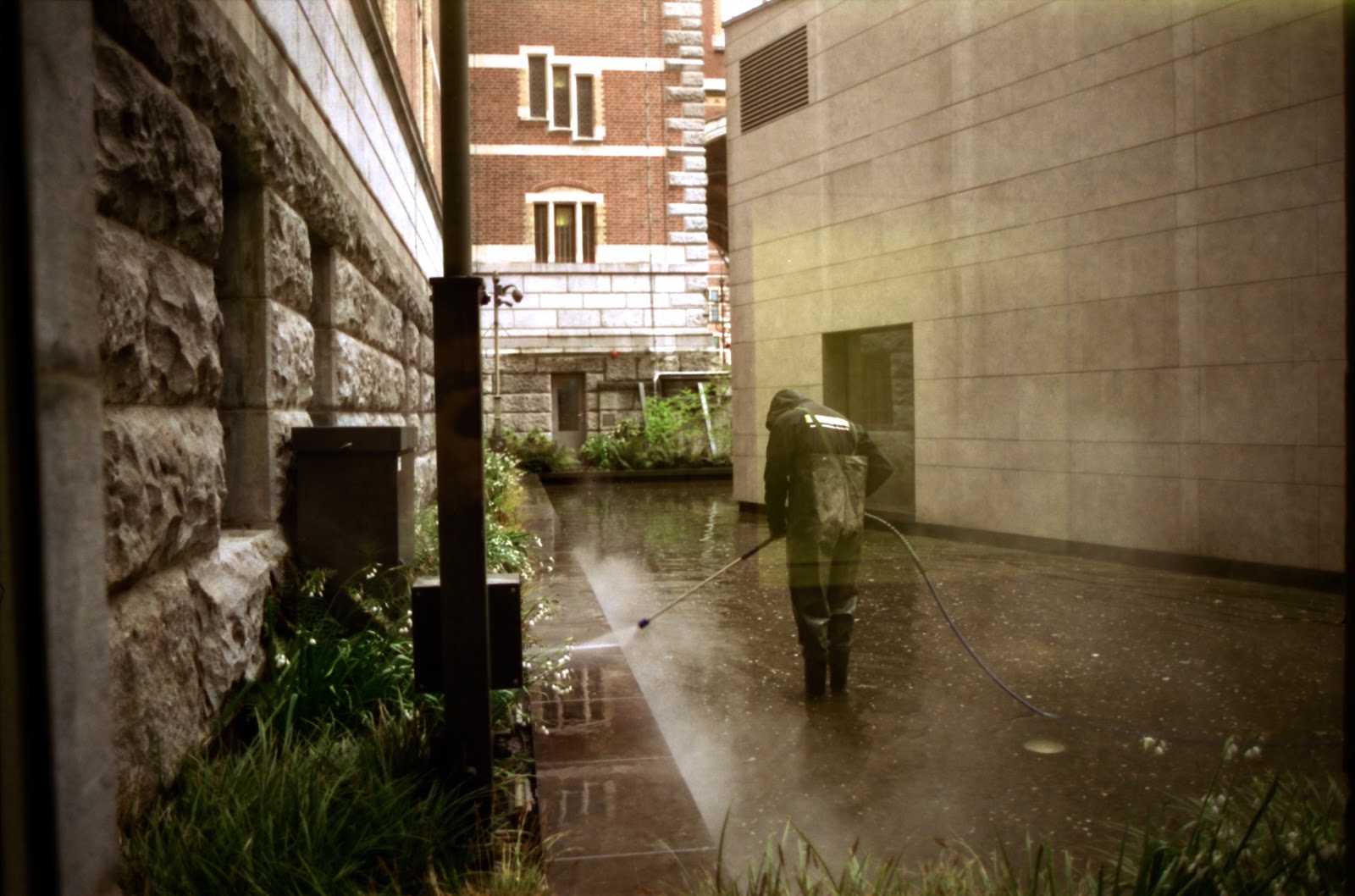 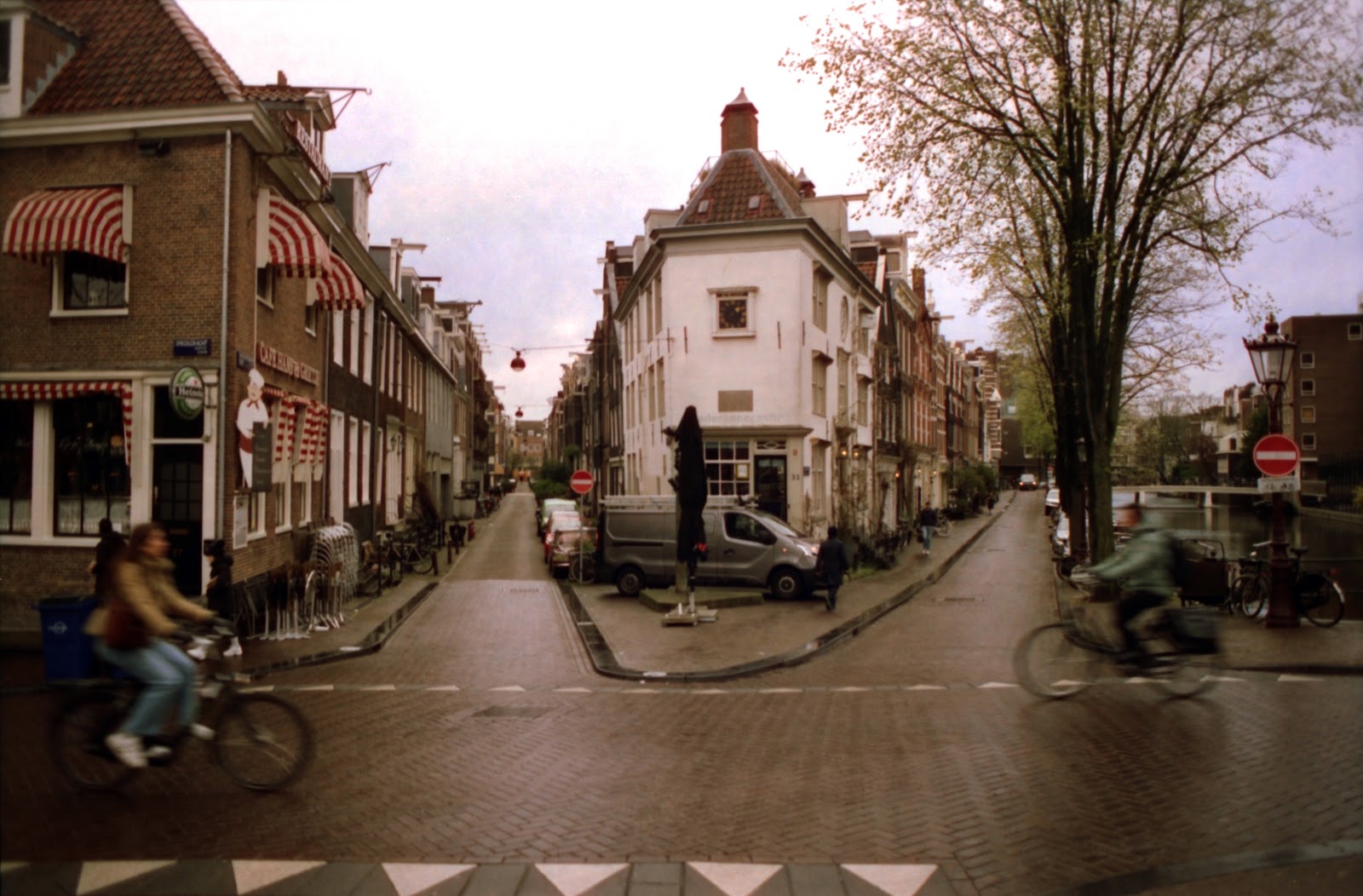 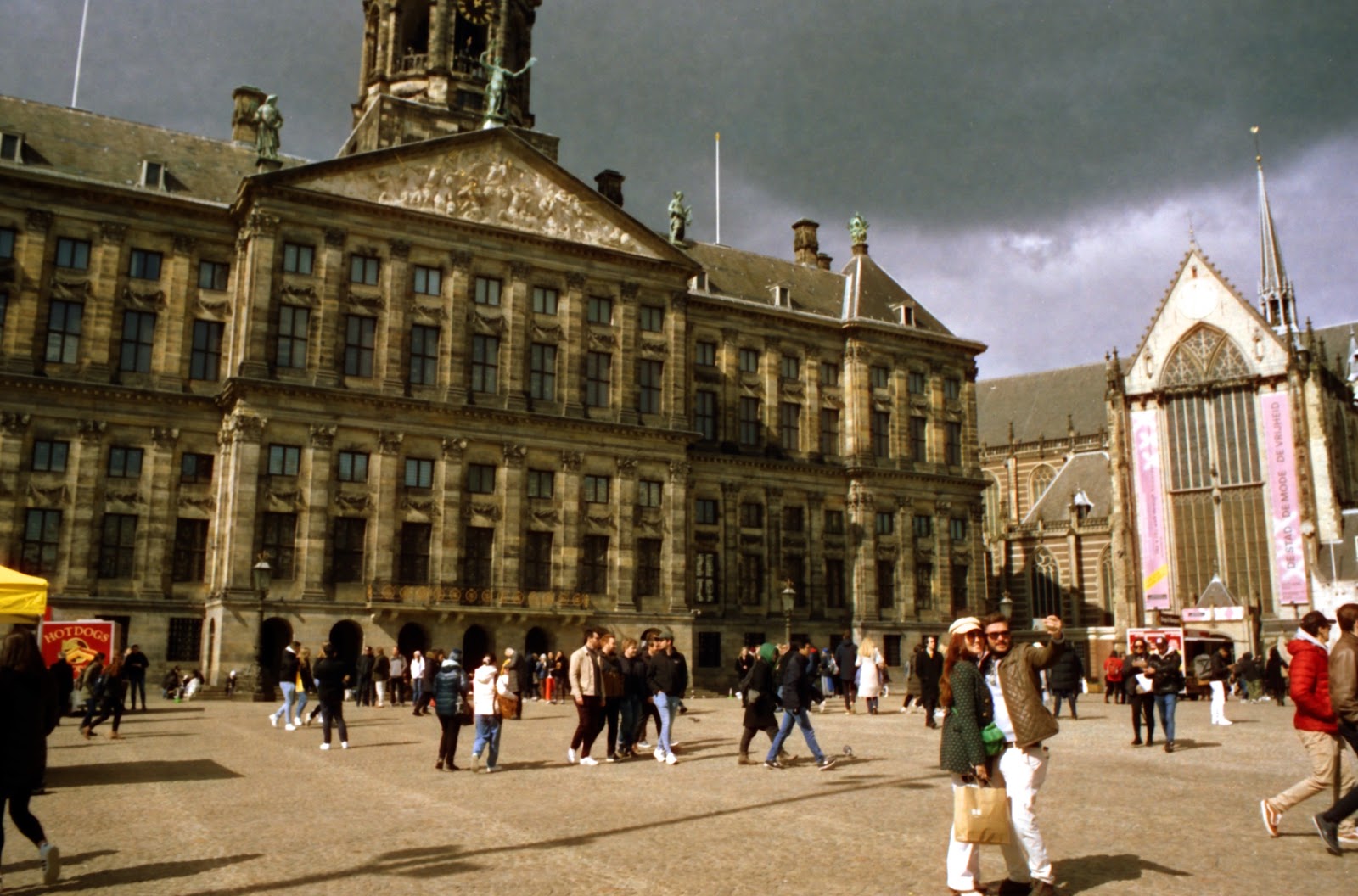 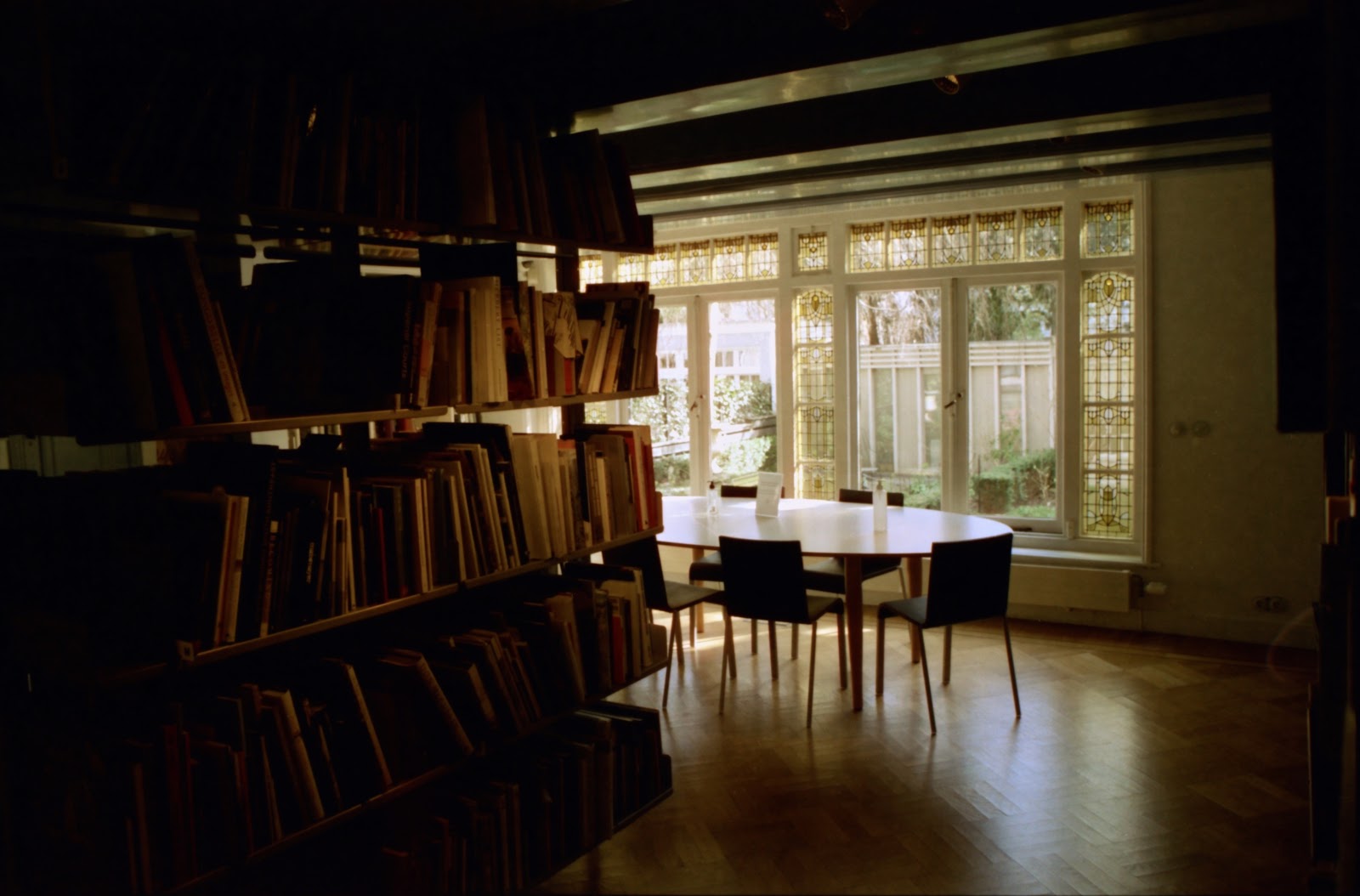 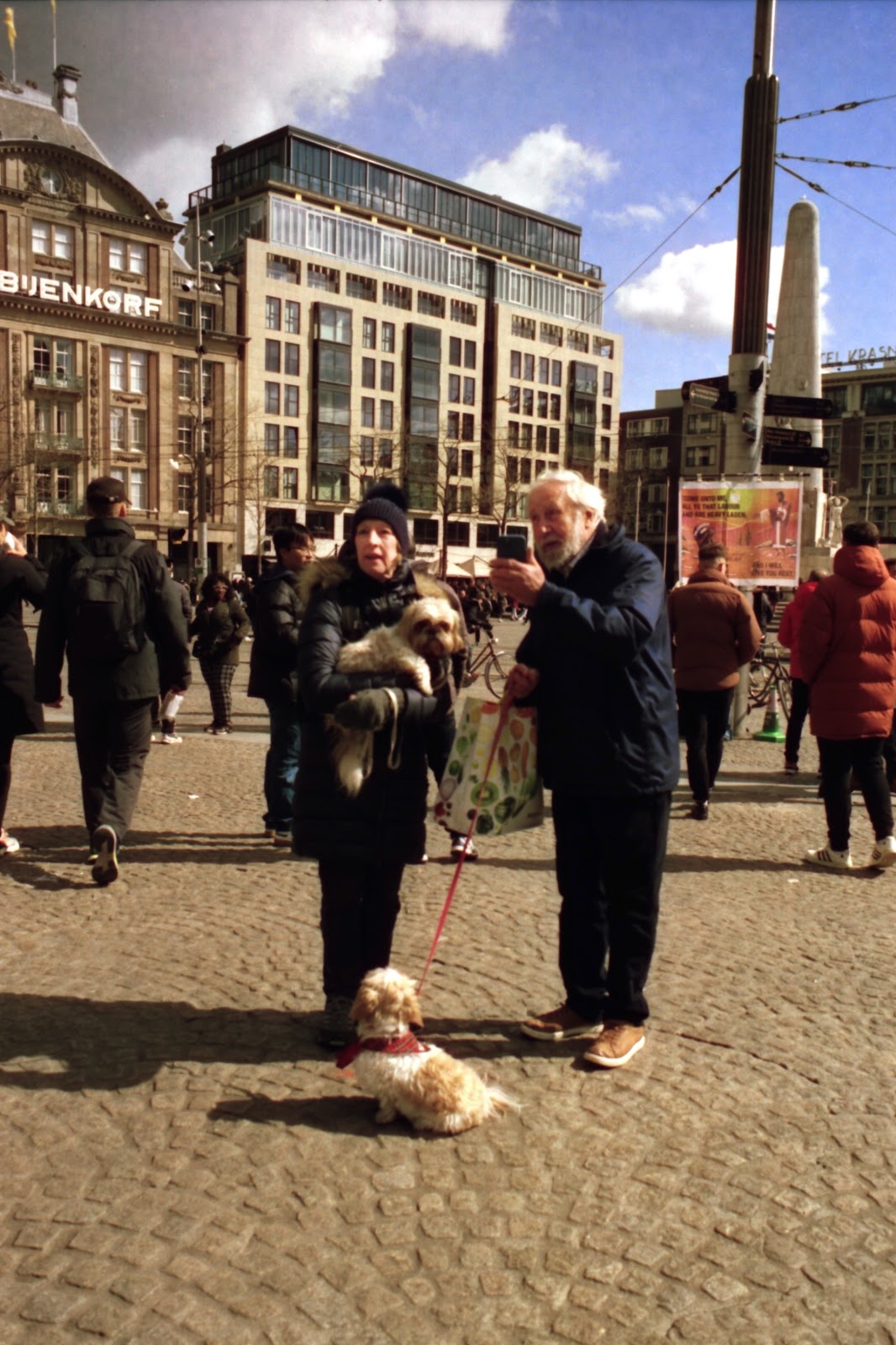 Meanwhile, the Olympus Stylus point-and-shoot was simple, quick, and low profile, allowing me to shoot on the move, even while riding a bicycle. The two 35mm cameras ended up being my main workhorse cameras, while the 120 Mamiya 645 is probably more suited to controllable or consistent conditions, like in-studio, rather than a run-and-gun style for street shots. Over the course of the trip I only shot a few frames in the Mamiya.

At the end of the day the group wound up at the popular Museumplein park where we said our farewells. As a solo, semi-introverted traveler, meeting the ACA was out of my comfort zone but ended up being a perfect way to meet locals with a common enthusiasm for film photography. I felt like I fit right in, and an added bonus was insider tips on neighborhoods, galleries, cafes, and restaurants to check out on my own.

The rest of the week flew by. Before I knew it, the home exchange came to an end, and it was time to fly back to New York. Traveling internationally after 2 years of restrictions was a breath of fresh air, a chance to see things from a different perspective and break out of my comfort zone. If any reader has the opportunity to set up a home exchange: go for it! You’ll travel with free accommodation, get inspired, and hopefully make new connections. And of course, bring your camera(s) along for the ride to make some memories.