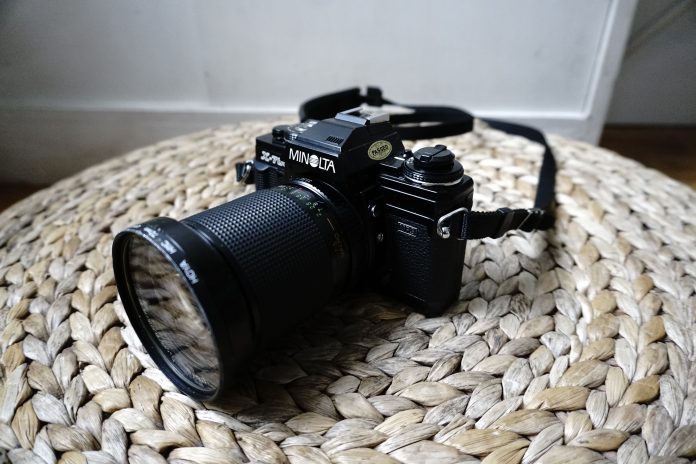 When I first moved to New York three years ago, I knew I wanted to get into film photography but had no idea where to begin. The idea of picking a camera and knowing which film to use were all so daunting to me regardless of how many YouTube videos I watched and reviews I read. I’d never even used disposable cameras at the time.

One morning, I decided that I had to buy a film camera that very day. I googled where to thrift film cameras in the city and headed straight to Housing Thrift Works, which is a great non-profit organization fighting AIDS and homelessness.

So, I’m in the store, crouched down at the camera table, looking up the details of each camera trying to make a decision on which one I wanted to grab. This guy talked to me about a couple of the cameras on the table, picked up a pretty large video camera, said goodbye, and ran out the door. I almost believed I was making up the whole thing because of how fast it all happened! Not a single employee noticed, even though they were walking in and out of the front door to bring in new products. It was definitely an interesting introduction to the city! So, I continued my search and I googled the specs and reviews of each camera in front of me and basically picked a camera at random: the Minolta x-700. I ordered a Minolta MD 50 mm f1.7 lens, some Fujifilm Superia X-TRA 400 color film, and got to shooting.

The first roll came back with a lot of issues due to capacitor problems, so I sent the camera to be fixed for a very reasonable price and then got to shooting again. Turns out, I lucked out! This Minolta has been the perfect camera for me even as I cycle through other film cameras.

It’s lightweight and compact, so I’ve been able to carry it with me as I travel all over the world. It’s very user-friendly. As a digital camera user for years, I was able to start shooting right away…after I finally figured out how to open the back of the camera to put in my film. I’ve been able to seamlessly shoot double exposures and every type of 35mm film. I also think the shutter release makes a great sound and advancing the film feels very satisfying.

Coupled with my favorite Fujifilm color rolls, I’ve found that my Minolta has been very sharp and captures the colors around me beautifully.

The camera is reliable, and the built-in meter has always been accurate when I’ve used it. It’s also very durable! I tripped and fell with this camera in tow – the camera got a little dent and worked just fine, meanwhile I had to get meniscal repair surgery.

Although I have shot on more advanced film cameras, I always find myself coming back to the Minolta x-700. It really is the perfect SLR, and if you ever see on in store, grab it! I’m so glad that dude decided not to pilfer my tried and true at the end of the day!

Mariam Khalil is a talented energy engineer who loves expressing and exploring the environments of NYC through photography . You can see her work at yoitsmariam.com or on her instagram here.